The Arkansas State Archives is an agency of the state of Arkansas and is located at 1 Capitol Mall, Little Rock, AR, on the second floor. The Arkansas State Archives was created as the Arkansas History Commission by the state’s General Assembly in 1905 to preserve the state’s historical records. It continues its century-plus tradition of collecting and preserving the history of Arkansas by increasing and maintaining its holdings of state and county records, manuscripts, newspapers, military records, family histories, local histories, published works, and artifacts. Besides Arkansas materials the Archives holds a large collection of materials for all Southern states and a large microfiche collection of a variety of published historical materials.

The Research Room in Little Rock is open to the public six days a week, Monday-Saturday, from 8:00 to 4:30. Parking can be found on the west side of the building on either side of Wolfe St.

The Archives’ catalog and records finding aids can be found at archives.arkansas.gov.

Copies can be made to personal computers or sent by email or copied to a flash drive provided by Archives.

The Archives hosts a number of events throughout the year including historical symposiums and genealogical workshops. A Foodways Symposium is held once a year highlighting the food and history of an ethnic group of Arkansans. In the past these have included German, Italian, Chinese, and Greek Americans.

The Black History Commission of Arkansas is linked to the Arkansas State Archives and deposits its materials with the Archives. It hosts programs about African American history and provides grants for projects providing black history education. 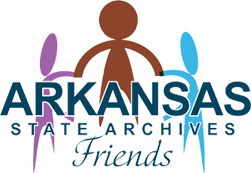